An inguinal hernia is a bulging in the pubic or groin area of the abdomen, near the left or right inguinal canal, which develops due to a weak abdominal wall. The small intestine or fat tissue may push through such weakness and protrude resulting in a bulge and often in groin pain, especially when exercising, lifting something heavy, bending over or coughing.

Under normal conditions the abdominal muscles and the connective tissues of the abdominal wall are strong and tight enough to keep the inside tissues in place, but when a weak spot is present it is possible to develop an inguinal hernia.

The inguinal canal is a small passage in the lower abdominal wall that allows blood vessels and nerves, as well as the spermatic cord in males and the round ligament of the uterus in females, to pass through.

Inguinal hernias are the most common type of abdominal wall hernias and have a lifetime risk of occurrence estimated in 27% for males and 3% for females; they are more common on the right side than the left side. 800,000 inguinal hernia repair surgeries are performed each year in the USA alone. 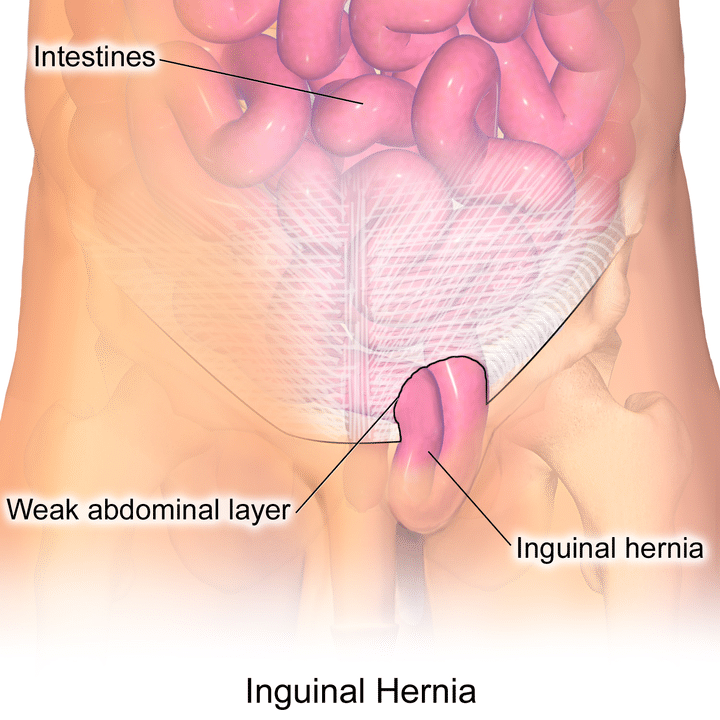 An indirect inguinal hernia occurs when the inguinal canal doesn’t fully close during development. It affects 1-5% of newborns and is generally diagnosed in the first year of life, but sometimes indirect hernias don’t show up until adulthood.

A pantaloon hernia is a combination of both a direct and an indirect hernia affecting the same patient. The name originates from the shape of the two hernias together.

Femoral hernias are bulging of tissues through the femoral canal, the passage that allows blood vessels to go from the abdomen to the thighs. Bulging is generally seen in the top inner thigh area. Femoral hernias are more common in women than men due to their pelvic anatomy and have a higher risk of strangulation. They are often not diagnosed until acute symptoms such as strangulation or bowel obstruction affect the patient.

Males are about 8 times more likely to develop an inguinal hernia than females and it is estimated that 1 in 2 males will have an inguinal hernia develop in their life. The chance of having one increases with aging. Femoral hernias are the rarest type in males. The protruding tissues in male patients may occasionally descend into the scrotum causing pain and swelling around the testicles.

Inguinal hernia in children and babies

Inguinal hernia in babies are most commonly due to a congenital defect (present from birth) affecting 1-5% of newborns and about 10% of premature babies, which causes an indirect hernia. Direct hernias rarely occur in babies or children.

An incarcerated hernia or incarceration occurs when the hernia cannot be pushed back into the abdomen by applying manual pressure. In this case, the bulging in the groin area is permanent and requires surgery to fix it.

A strangulated hernia or strangulation occurs when a hernia has its blood flow cut off due to incarceration. This is a serious medical condition requiring emergency surgery and can be fatal. The bulging tissues without blood supply become ischemic and die, causing great pain and release of toxins.

The causes of inguinal hernia are multifactorial, meaning there isn’t a single cause, but many factors contribute to the development of the condition. A weakened abdominal wall or a congenital defect of the inguinal canal are major contributors to inguinal hernias.

The risk factors identified to increase the chance of developing an inguinal hernia are:

The role of heavy lifting as risk factor, whether due to a single strenuous episode, or due to a physical demanding job, or to exercising, is still controversial and studies have been inconclusive.

About one third of patients don’t experience any symptom at all and the hernia is detected by a physician during a physical examination.

The main symptom of an inguinal hernia is a bulge on either side of the pubic bone; in males, the bulge can be in the scrotum. The bulge may appear all of a sudden or develop over several weeks.

Sudden or severe inguinal pain and inability to push the hernia back through the abdominal wall are possible signs of strangulation. Other symptoms include:

When symptoms are present, but no bulge is found, or to exclude other conditions with similar symptoms, imaging studies may be prescribed. These include:

For asymptomatic hernia, your doctor may just advise to wait. Hernias won’t get better on their own, so you will have to monitor the evolution of the symptoms which is known as watchful waiting.

When symptoms are present, surgery is generally recommended. There are 3 types of surgical procedures available for treating inguinal hernias and the choice may depend on many different factors such as the patient’s age and medical history, the size of the hernia, the surgeon’s experience and the availability of surgical equipment at the hospital (ie. Surgical Robot), as well as if it is an elective surgery or an emergency surgery.

Open hernia surgery requires either a local anesthesia plus sedation or general anesthesia. The surgeon then will perform an incision in the groin area to push back the hernia into the abdomen. When stitches are used to sew the weak spot and prevent the hernia from bulging again it is called herniorrhaphy; when a synthetic mesh is used to reinforce the abdominal wall, it is called hernioplasty.

Laparoscopic (keyhole) surgery is a minimally invasive procedure where several small cuts are made instead of a single large incision. It is typically performed under general anesthesia. A camera will be inserted through one of the incisions to visualize the inside of the abdomen which will be inflated by introducing gas to better visualize the organs. The instruments will be inserted through the other small cuts to perform the surgery. After reducing the hernia, the surgeon inserts a piece of synthetic mesh to strengthen the abdominal wall.

Laparoscopic surgery allows for a quicker recovery with less pain and fewer complications, but there is risk of a recurring hernia if the surgeon is not highly experienced in this specific operation.

With the increased use and availability of surgical robots, robotic inguinal hernia repair became available. It is performed similarly to laparoscopic surgery, but the instruments are handled by the surgeon by using a console. It allows for greater precision and better visualization when compared to traditional laparoscopic surgery.

Is Inguinal Hernia treatable without surgery?

Surgical treatment is the only available option for inguinal hernia. Watchful waiting is an option for uncomplicated and asymptomatic hernia. Delaying surgery when recommended will make the symptoms grow worse with time and will allow the bulge to grow bigger, requiring a more invasive surgery for repair. You will also pose yourself at risk for strangulation, which can be fatal and requires emergency surgical treatment.

Supports, trusses and strapping which apply pressure on the hernia to keep it in place may sometimes alleviate some of the symptoms, but will not cure the underlying condition and it is generally not recommended as it won’t prevent incarceration or strangulation.