Nephrolithiasis or urolithiasis is most commonly known as kidney stone disease. Kidney stones (a.k.a. renal calculi) are solid crystals that form in the urinary tract and are a common health issue; statistics vary among countries and in the US the lifetime risk of developing kidney stones is around 7% for females and 12% for males. The incidence of this disease has been steadily increasing over the past decades with most stones developing in persons aged 20-49 with a recurrence rate after the first episode that can be as high as 94% depending on many factors.

Stones form in the upper urinary tract, but when they move into the ureter, the small tube between the kidney and the bladder, they can cause a renal colic which is often described by patients as the worse pain they ever experienced. 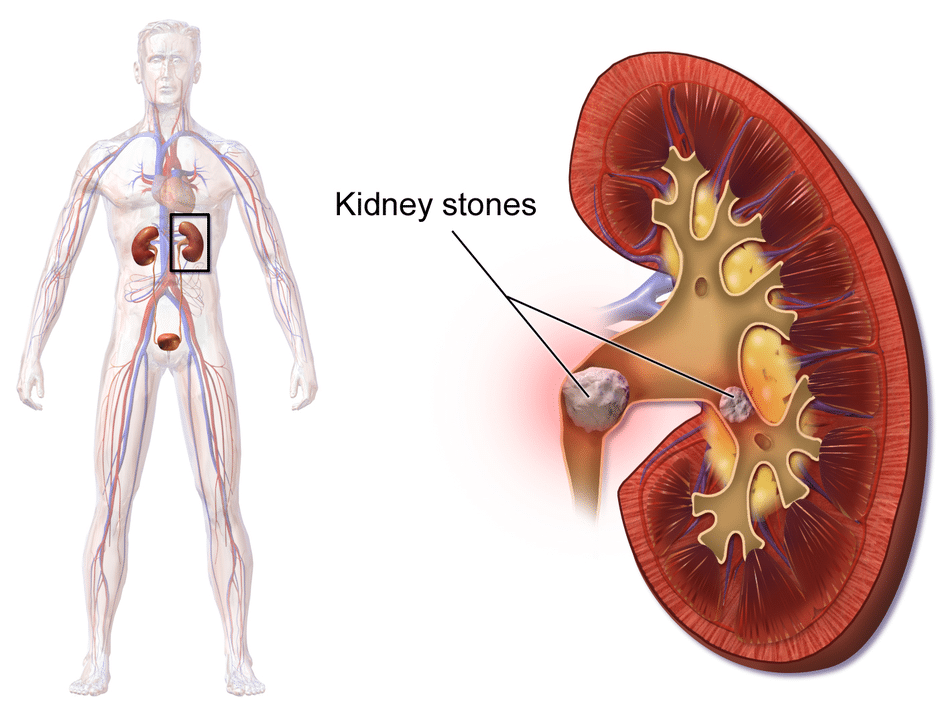 There is no definite single cause for kidney stone formation, several factors are involved in the process. Kidney stones form due to supersaturation of urine: urine is a solution containing minerals and other substances that have the potential to crystalize; when the amount of these substances is higher than what can be dissolved in the liquid portion of urine, crystals starts to form leading eventually to kidney stones.

Many factors play a role to increase the risk of suffering from nephrolithiasis, including:

Calcium stones are the most common type of kidney stone representing 70-90% of all renal calculi and can be made of two different chemicals:

Struvite stones account for 1-15% of all renal calculi depending on the source. Struvite is a mineral that forms when magnesium, ammonia and phosphates combine together. This happens when a bacterial infection occurs in the upper urinary tract, due to some bacteria that are able to convert the urea into ammonia and elevate the pH of urine including Pseudomonas, Proteus, Klebsiella and Staphylococcus.

A particular type of struvite stone is the Staghorn calculus, which is a coral shaped stone filling the renal pelvis and/or the renal calyces. Most patients will require surgical treatment to avoid loss of kidney function and sepsis.

Cystine stones are rare and represent just 1-2% of all renal calculi. They are caused by a genetic defect that leads to increased levels of cystine, an amino acid, in urine.

Kidney stones in general don’t cause pain until they start moving through the kidney or into the ureters. Stones take weeks, months or even years to grow to a detectable size. They may take even longer to become symptomatic, due to their movement, with pain or blood in the urine (hematuria)

Small stones may cause no symptoms at all or just minimal pain or discomfort.

Larger stones cause symptoms such as:

Kidney stones may be suspected based on the history of the patient, symptoms and physical examination. Blood test may show elevated white blood cell count when a urinary tract infection (UTI) is present. Urine analysis may show white and/or red blood cells and sometimes crystals, but their absence doesn’t rule out the presence of a kidney stone.

Confirmation of the diagnosis requires an imaging study such as the computed tomography (CT-Scan), magnetic resonance (MRI) or ultrasound scan.

How are Kidney Stones treated?

Treatment of nephrolithiasis varies depending on the type of stone, the size and the location, whether there is an infection or obstruction or not, and the symptoms experienced by the patient.

Small stones less than 5mm usually don’t require treatment and will pass through causing no symptoms, or just some discomfort or limited pain depending on the individual case.

Treatment of larger stones may include:

How to prevent nephrolithiasis

The following are measures to help prevent kidney stone formation. They consist mainly of lifestyle and dietary changes and are easily adoptable by patients. Specific stone types, test results or specific conditions affecting patients may require different interventions, for this reason always refer to your treating physician for advice.

The main factor promoting kidney stone formation is supersaturation of the urine. Supersaturation of urine is caused by low urinary volume, which is the result of low fluid intake. For this reason, drinking plenty of water is a very easy and effective way of preventing kidney stone formation. Patients should aim at 2-2,5 L of urine every 24-hour which means drinking at least 2,5-3 liters of water every day. Those who live in warmer climates or who exercise more may have to drink larger amounts of fluids in order to achieve the target urine output.

Some drinks such as orange juice may be helpful in the prevention of kidney stones by increasing the levels of urinary citrate, while others such as cola may increase the risk of nephrolithiasis due to its phosphoric acid content.

1,000-1,200 mg of calcium per day, which is the calcium RDA, is associated with lower risk of stone formation.

Fibers seem to have beneficial effects on nephrolithiasis and fruits and vegetables in general increase the pH of urine and citrate concentration lowering the risk of kidney stone formation.

Excessive intake of oxalate-rich products leads to high oxalate concentration in urine, with higher risk of oxalate stone formation. Oxalate rich products include rhubarb, beets, spinach, cocoa and chocolate, wheat bran, tea leaves and nuts. Vitamin C is a precursor of oxalate and should be limited to a maximum of 1,000 mg per day.

Specific medical intervention to prevent kidney stone formation based on test results or metabolic abnormalities include: