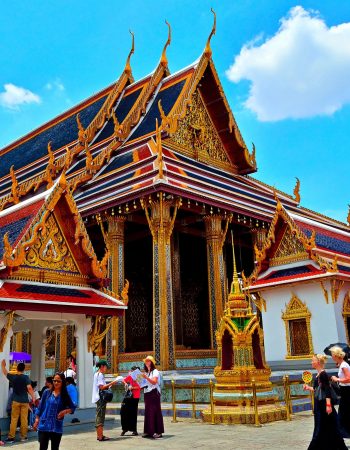 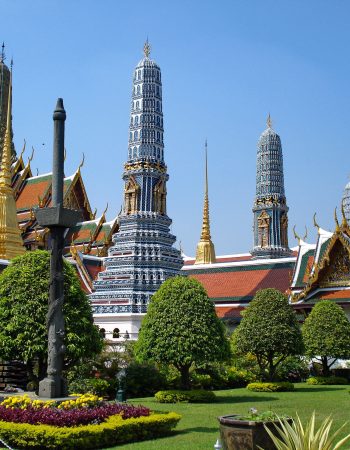 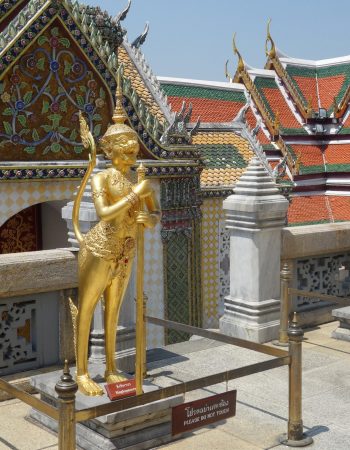 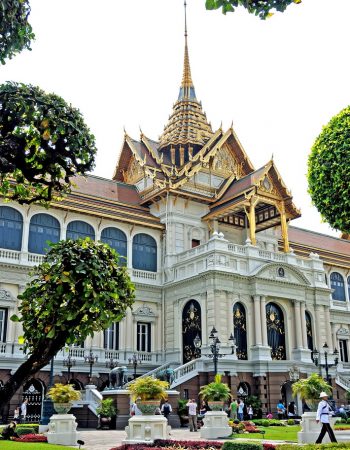 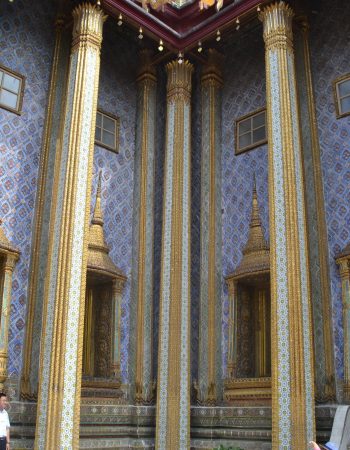 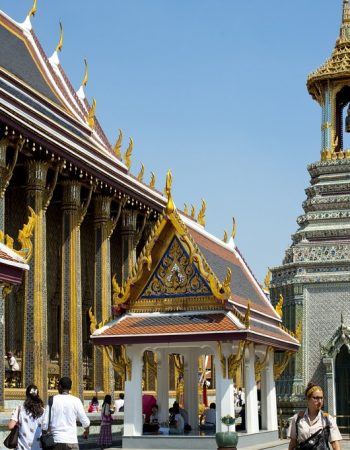 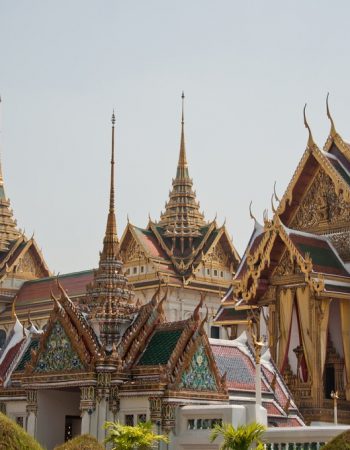 The Grand Palace and the Temple of the Emerald Buddha – Bangkok

Step into the History and Beliefs of Thailand

Integrated glided spires. Arched windows. Cluster with French roofs.  Mythical animal figures. Mural paintings on corridors. Finest mosaic works.  Is there any other site in the world comparable to this very special place?

The Grand Palace, which reads Pra Borom Maha Ratcha Wang in Thai, is recognised as one of Thailand’s most sacred royal and religious venues. Wat Phra Kaew, or the Temple of the Emerald Buddha, is another key site within the compound of the Grand Palace for the temple was built with the command of King Rama I. Specially classified as the only temple in Thailand without living quarters of Budddhist monks, Wat Phra Kaew is one of a kind and mainly serving religious ceremonies of Thai monarch.

Interestingly featuring the fusion of traditional Thai architecture and the 19-th century European style, the Grand Palace is flawless in terms of unique beauty, while Wat Phra Kaew boasts elaborate details of traditional architecture and decorative arts rendered by most prominent artists of early Rattanakosin era. Proven with 8 million visitors each year, the Grand Palace is truly a captivating site that travellers must not miss when visiting Bangkok.

With long history dating back to the herald of Rattanasokin era under the reign of Chakri Dynasty, the construction of the Grand Palace was known to have begun in 1782 with the order of King Rama I to use as the formal residence of the monarch, as well as the administrative offices, which involved royal duties and functions.

With an approximate land area of 60 acres, the Grand Palace consists of sophisticated plan of buildings, which serve different purposes and royal affairs. Besides Wat Phra Kaew, the Grand Palace comprises three main parts, including The Outer Court, The Middle Court and The Inner Court. Areas that are open to public include The Outer Court and The Middle Court.

The Outer Court covers the area from Visetchaisri Gate to the Phimanchaisri Gate. This area includes several government offices, the royal guard office, the headquarters of the Grand Palace, the Office of His Majesty’s Principal Private Secretary and the Bureau of the Royal Household. The entrance to Wat Phra Kaew is located in this area.  The Middle Court consists of several prasats or Phra Thinang, which are the Phra Maha Monthien Buildings, Phra Maha Prasat Buildings and Phra Thinang Chakri Maha Prasat Buidings.

Phra Maha Monthien is geographically the heart of the Grand Palace, which also served as the dwelling of kings in early Rattanakosin era. There are multiple throne halls within the Phra Maha Monthien, which mainly include Phra Thinang Amarin Winitchai, which welcomed foreign ambassadors in bygone days; Phra Thinang Phaisan Taksin, which was not only the dwelling of King Rama I, but later also transformed to use for coronation ceremonies for Chakri Dynasty kings; Phra Thinang Chakraphat Phiman, which was used by kings as their sleeping chambers; Phra Thinang Dusidaphirom, which features the elephant-mounting platform for the arriving and departing of kings.

Phra Thinang Chakri Maha Prasat is a stunning complex of throne halls with the influence of European architects who supervised the construction in the era of King Rama V, who used the prasats to imply the resistance against the intensifying Westernisation.  Apart from Phra Thinang Chakri Maha Prasat group which includes reception rooms, thrones, galleries, libraries and the assemblage of ashes of previous kings, the prasats consists the following: Phra Thinang Moon Satharn Borom Ard, which was where King Ram V was born; Phra Thinang Sommuthi Thevaraj Uppabat, which comprises council and state rooms; Phra Thinang Borom Ratchasathit Mahoran, which serves functions and banquets.

Apart from the aforementioned buildings, there are other premises, including minor thrones, pavilions, ordination hall and other edifices that serve religious and court errands. Unfortunately, The Inner Court is not available for public viewing. The compound was once inhabited by kings, queens and consorts.

In addition, The Grand Palace houses the Museum of The Emerald Buddha Temple. Not only this 160-year European building is worth seeing as it was once the Royal Mint, but the artifacts inside are invaluable and rare to find. Interesting objects range from ancient cannons, antique Buddha images, statues, royal elephant skeletons, regal seatings and many more.

If you are visiting The Grand Palace, all that matter is appropriate attire and composed gestures. Sleeveless, tank top, vest, tube, crop top, see-through shirt or blouse is prohibited, as well as jeans with holes, mini skirt, short pants and tights. Mind the wearing of hat, sunglasses, umbrella, and the use of camera where required. Do not make loud noises or drink water within prasats. Take off shoes when asked.