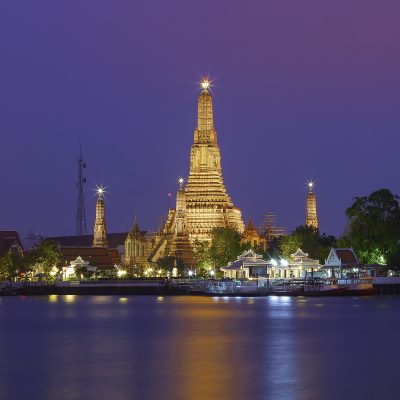 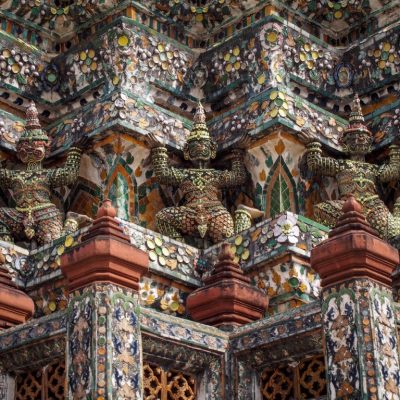 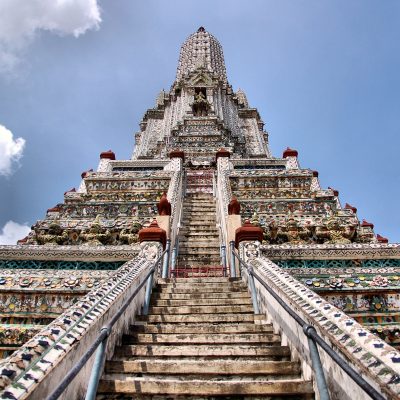 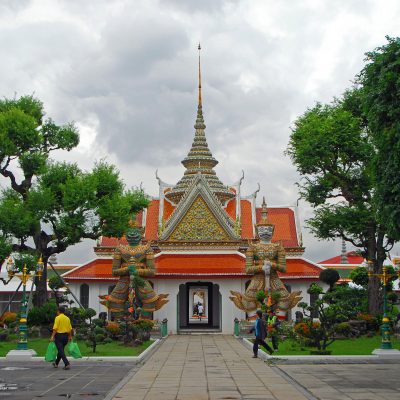 Wat Arun Ratchawararam Ratchawaramahawihan (Thai: วัดอรุณราชวราราม ราชวรมหาวิหาร), also known as the Temple of Dawn due to the fact that it reflects the early morning lights off its surface, was formerly known as Wat Makok during the Ayutthaya Kingdom and later Wat Chaeng when King Taksin moved the capital city to Thonburi after the fall of Ayutthaya. Its current name derives from Aruna, the Indian God of Dawn.

The central prang (Khmer-style tower) is considered to be the world’s tallest with the approximate height of 86m and is decorated  with floral mosaics made from broken porcelain, which was used as ballast by Chinese ships docked in Bangkok. Its construction began during the first half of the 19th century by King Rama II and was later completed by King Rama III.

Surrounded by four smaller prangs, the central prang symbolizes Mount Meru of Hindu and Buddhist cosmology. It is believed that worshipping it will bring prosperity and eternal happiness and it is done by walking around the prang three time in a clockwise direction, holding three jock sticks and a pair of candles, while contemplating the Buddhist doctrine of the Four Noble Truths of the enlightened Buddha: Dukkha (suffering), Samudaya (end of suffering), Nirodha (arising of suffering) and Magga (way leading to the end of suffering).

The temple is located next to the Royal Thai Navy headquarters, on the Chao Phraya river opposite to Wat Pho. Cross river ferries run every couple of minutes for just 3 THB.